Life on board the Lady Washington today:

I got up at 5 am to make an early breakfast - engine being lowered in at 7:30am. Breakfast was egg & cheese muffins served up with those hashbrown patties just like they give you at McDonalds. Next time I'll go to Micky D's and get some matching cups and napkins for the theme breakfast. Also served oatmeal with cranberries, and smoothies, of course. Strawberry-banana with almond milk and honey.

We were all up, had muster and beginning chores by 7:20 am, which is too early for most of us. Everyone was tired today. Swain-O and I had gone to the YMCA last night for an incredibly exhausting workout called "Boot Camp" and then stayed up late in the aft cabin with the captain and the engineer, making up the most crude jokes imaginable. I think the four of us are quite happy to be in each other's company - we can say the most godawful disgusting sarcastic things about dead babies, sex, mothers, bodily fluids and mental disabilities far more comfortably than we can around anyone else these days. But everyone was tired today. Our boss is a morning person and often shows up at the boat just before everyone else shows up for breakfast. He's a GREAT boss (Micah), but he's far more raring to go than anyone else in the morning. Swain-O, the Engineer, myself and Tiller are all morning types. But not too early. Everyone else on the boat would probably rise at 10 or later if left to their own devices. They are barely coherent at breakfast.

So the engine was in the back of Bill's truck on the dock all night, and the crane arrived the night before as well. The crane was on by 7:45am and the engine was in the boat within a half an hour. I was on the computer waiting for Ivan to clean my galley and Swain-O came down with her camera. I immediately posted her pics on FB and an hour later the Boss was calling the captain wondering how in the hell we already had engine dropping pics on FB. Alum crew appreciated it though. 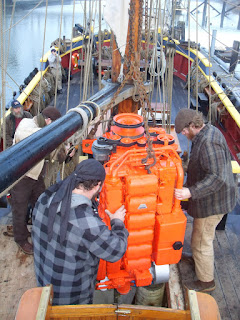 Daisy stayed in bed sick today - just another victim of the rampant respiratory problems that cycle around the boat. I've never had healthy sinus behavior on this boat. David Cottrell and I were discussing this and how a more closed off crew would cycle things through and then they'd all be over it, whereas here there's a constant flux of crew/visitors bringing new and exciting viruses to share.

The crew are mostly serving rigging at the Seaport these days. I look up recipes at allrecipes.com between meals, figuring out what I should make next. Made chili and rice with salad and chocolate chip cookies for lunch today. Dinner was a big old taco bar, with salad and a pretty sweet cornbread-tomato-cheese-onion bake. Had two guests for lunch today; Frances Cottrell and Peter Marsh, who helps run the maritime museum in Astoria along with a few boating publications. He was here to take photos of the new engine for an article.

Swain-O and I got to go to the YMCA early tonight. The engineer was there, pretending he didn't know us (we are dorks) and eventually we left him to his routine and went out to the pool. The pool there has this area called "lazy river" which isn't lazy at all. It's an oval loop with strong jets propelling the water continuously around it. You can either get carried around in the flow and fight to keep above water AND your swimsuit on, or swim against it, which is a great workout. Eventually we retired to the hottub and wished we had some cocktails. I think we stick out a bit at this YMCA because I have more tattoos than any other women there and Swain-O has a decent body. Not from 'round these parts, obviously...
Posted by JT at 22:42