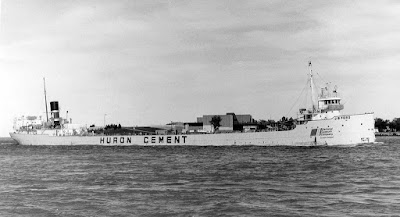 Push is underway to preserve veteran steamboat J.F. Ford as a museum ship
A 108-year-old Great Lakes steamboat may soon be headed for oblivion unless preservationists can make some headway in raising funds to save the ship as a maritime museum.

The J.B. Ford, a former ore freighter turned cement carrier, was launched at Lorain, Ohio, in 1903 – eight years before the RMS Titanic made her fateful maiden voyage – under the name Edwin F. Holmes. When built, she was typical of the freighters of her day, just 440 feet long, a utilitarian vessel in most aspects unremarkable, said Steve Haverty, a Minnesota-based historian who is part of a group trying to rescue the vessel.

“She possessed nothing out of the ordinary or advanced for the time period, and this is one of the things that makes her so very special today,” he observed. “Her beginnings show off the standard everyday life of lakers back then. Having only been modified a couple times in her lifetime, she retains a huge amount of her original design and construction.”

Haverty and others have formed The Great Lakes Steamship Society, a 501(c)(3) nonprofit organization dedicated to the preservation of the ship, which at present is tied to a dock in Superior, Wis. In a career that lasted over a century, this grand old lady of the lakes carried the goods that fed the industrial might of our nation, hauled the raw materials that helped to win two world wars, and survived some of the Great Lakes’ worst storms, including the infamous “White Hurricane” of 1913.

Time, Haverty said, is not on their side. Although the group has been in contact with the vessel’s owner, Lafarge North America Inc., the ship’s future is far from secure.

“The J.B. Ford is next on the chopping block this coming season, and we have been told that if something isn’t solidified for her preservation, it is likely she too will head to the scrap yard and be lost forever.”

Richard Jenkins, a ship enthusiast and historian from Massachusetts who is working with Haverty, agreed. “They have been receptive to our ideas,” he said of Lafarge, “but there are still details to be worked out.  First and foremost, we must prove to them that we are a credible organization with a solid plan and the resources to preserve the ship.”

If The Great Lakes Steamship Society is successful in its efforts there are several possible outcomes, Jenkins added.

“We have been in discussions with several cities and other organizations with an eye to finding a permanent home port for the ship once we acquire her, Jenkins said. “Perhaps the most promising of these is Alpena, her longtime homeport as well as home to the Thunder Bay National Marine Sanctuary where the sunken wreck of her near-sistership Etruria lies.  In addition to being a tourist draw for Alpena, there is the possibility of the Ford being a valuable resource for divers planning dives to the Etruria and other wrecks of similar vintage, and cross-promotion between the preserved J.B. Ford and the Marine Sanctuary could be beneficial to both.  Discussions are ongoing, but as of yet no firm commitment has been made.” 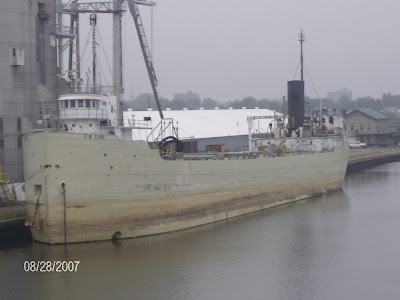 Costs for stabilizing and restoring the ship could run as much as $1.5 million.

“We estimate just to keep her temporarily where she is will cost approximately $25,000 per year between docking fees, power for lights, heat and insurance.  Restoration and preparations to make her safe for visitors will likely cost between $1.2 to 1.5 million, including drydocking, towing, topside steel work, paint, cleanup, and accessibility considerations,” Jenkins estimated.

Some of the costs could be taken care of through grants and other assistance programs, and some of the restoration work could be undertaken by volunteers. Inactive since 2008, the vessel was last drydocked in 2004 and her underwater openings sealed for her long-term use as a storage barge, so that potentially expensive work has already done, making drydocking less of an urgent priority than it might otherwise have been.

Built as a traditional iron ore carrier, the vessel – which in addition to the Edwin F. Holmes also served under the name E.C. Collins – was modified to carry powdered cement in 1959 by the Huron Portland Cement Co. She last operated under her own power in 1985. More recently, she was used as a floating cement storage warehouse at South Chicago and at Superior, Wis.

Haverty and other members of the group have been hitting the bricks trying to get the word out about their efforts with speaking engagements around the lakes. They have gotten much-appreciated advice and information from other already established and successful non-profit and preservation groups.

“We are a long way from success, but we have come a long way since our incorporation 13 months ago,” Haverty observed. “(Saving the ship) won’t be cheap, but it will be well worth every penny.” 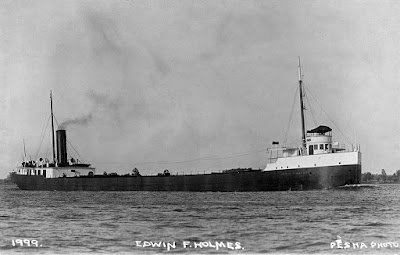