Today marks the anniversary of Joseph Conrad's birthday, and $1000 dollars is going to the winner of this contest, a tribute to Conrad, who documented the seafarer's experience during shipping's transition from sail to steam and diesel. We asked people to write about our eventual future; when we will be transitioning from petroleum-generated energy to alternative energy.

Hannah Hindley has written a beautiful story that is very fitting for this contest. It's about an engineer who is on his way to becoming obsolete. Hannah studied literature at Harvard and works, lives and sails around Puget Sound in Washington State. Here is an excerpt from her winning entry:

"...The companies began shifting the cargo, moving it below deck to protect it from slipping in the new, shifting rock and sway that the ships took on when the engine idled.  The journeys grew longer.  His equipment grew cold.  He would slink aboard each vessel with lowered eyes, evading the new young crew who spliced rope instead of wire, avoiding contact with the cocky new captains who spoke of pressure systems and wind.

He sought refuge in the sounds that remained.  He listened for small things that needed fixing.  Each morning’s engine check was like a little sunrise, and all day afterward he would grow cold with his machines.  How many real sunrises he missed in the darkness belowdecks, he couldn’t count, except perhaps in the wrinkles that crept out from the corners of his eyes, or in the small losses of height as his stoop deepened just a little each year.  With each passing season, as work slowed, the engineer felt more and more like a relic himself: a bicycle, a stagecoach, an artist with no paint.  And all the while, the sea slid ever so slowly past the portholes, and oil grew scarcer, and the masts on the decks of the vessels heightened and multiplied as he passed among them on his way to work...."

The rest will be printed in the next issue of Jack Tar Magazine, along with the other top entries, including the VERY CLOSE second place winner by Kris Day (recently the mate aboard S/V Orion). The other finalists were Maggie Ostler of PICTON CASTLE, Joe Follansbee of FYDDEYE/Gray's Harbor Historical Seaport Authority (also the author of The Fyddeye Guide to America's Maritime History), Maine Maritime graduate and traditional sailor Erik Romelczyck, Jen Webber of S.E.A., and mariner and author Brent Starling. Several others were close behind these top seven authors, and many of the 37 eligible entries will be featured in the Jack Tar, Issue #6. The turnout and the excitement over this contest was so inspiring that we may hold similar contests in the future.

The six judges are all seafaring people. Four are professional mariners. Two are educated cruisers with backgrounds in biology/fisheries management. Two of them did all of their reading during off-watch periods at sea over the last month. Two of them are spending time ashore before going back to sea, and the last two either live aboard or spend a lot of time aboard their own sailing vessels, preparing them for sea. They are an extremely conscientious and thoughtful group who chose to balance writing skills with content when making their decisions. Each was sent a group of around five stories at a time, and asked to read them in a random order, then pick their favorite from that group. The stories from each of the seven groups that had the most votes moved onto the final voting process. Most groups had two top stories, so there were really around a dozen popular entries total. These and more will all be featured in the next issue.

The donor of the prize has chosen to remain anonymous. 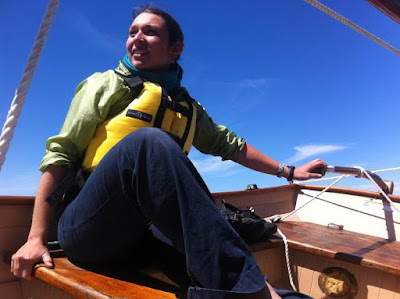